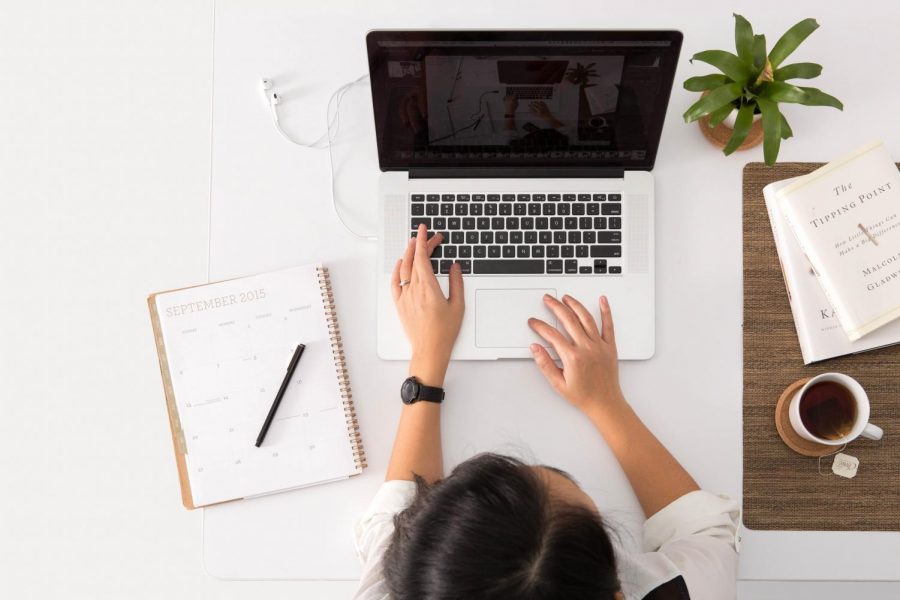 Photo by Avel Chuklanov on Unsplash

The outbreak of Covid-19 has greatly impacted students around the world, forcing many to turn to online resources to learn. Three high school students—one living in Hong Kong, one in Danville, and another in London—are finding similarities as they adapt to global pandemic.

Sakura, who asks to be mentioned by first name only, is a Year 12 student at an international school in Hong Kong, where school has been shut since the end of the Chinese New Year break in February.

“We never really had a quarantine for locals but anyone entering Hong Kong will need to be self-quarantined at home for 14 days and there is also ‘prohibition,’ which means that the selling of alcohol is stopped. … [Also,] no more than four people can gather at once and many places close by 6 p.m.,” said Sakura, who remains in Hong Kong.

She said the mood in Hong Kong has not changed much but people are “definitely more cautious. They stand further from each other.” Wearing masks is also a must for public outings, meaning that the prices of masks and disinfectant products have risen tremendously. Aside from the precautions, she said, life in Hong Kong is closer to normal than one may think.

Across the Pacific, it feels that people are not as optimistic at the moment. Unlike in Hong Kong where the virus has largely been contained, the death rate in the United States has been increasing exponentially. President Trump has extended the social distancing order to April 31 and residents are largely encouraged to remain at home until then. Other than businesses deemed “essential,” most small businesses are closed indefinitely

Sofia Couture is a junior at San Ramon Valley High School and sheltering in place has given her more time to reflect on what is important.

“The lockdown made me realize that we take a lot of things for granted such as our health, having food on the table, a roof over our heads, etc.,” she said. “Overall, I think that the lockdown is a good way for all of us to take care of ourselves and loved ones and be more grateful for what we have!”

Both students agree that they have become more appreciative of the times of normalcy and interaction.

Meanwhile in Europe the coronavirus has also spread rapidly, leading governments to impose measures to curb the spread.

“Well obviously things are quite chaotic with the prime minister in the hospital due to the contraction of the virus and the high demand for groceries among others,” said Annabel Chi, a Year 10 student in England. “Measures have been taken like limited walks for dogs in public spaces and also one has to book a slot in order to shop and they have arranged slots for shopping markets, for example 8 a.m. for the elderly. No shops are open in the streets except shopping markets and essential shops.”

(Prime Minister Boris Johnson was released from the hospital a week after he was admitted.)

In England, spirits are low as health workers struggle to care for the large number of infected patients and fears of recession are mounting.

“I’ll say right now people are getting quite anxious due to the bear market and small shops are not doing well,” Annabel says. “I think there is probably a gained respect for the National Health Service (NHS). … Every Thursday at 8 p.m. many people come to their front doors and applaud the essential workers in the NHS.”

Since Covid-19 originated in Wuhan, China, racism against Chinese and East Asians has risen around the world. Asked about racism in England, Annabel says that “earlier this month there were some cases of racism, targeting Chinese people and purposely excluding them, but I think recently, after witnessing and hearing about the cases of many British people contracting the virus—not only Asians—this racism has decreased.”

At this point, students in Hong Kong have had online learning for more than two months, using online resources such as Zoom and Google Classroom. Sakura said that “it’s really hard to begin with, but it gets better as time passes.”

With online learning, she said, “you still get to learn, but as for the cons, one is easily distracted and it is harder to learn online, especially if the environment at home is not great, but you have to try to make adjustments if possible.”

In Danville, where students have experienced only a few weeks of online learning, reactions have been dismal. Sofia is disappointed with the curriculum.

“I don’t think it’s well organized because the teachers don’t know how to use the resources that we have properly,” she said. “They should provide more instructions on the assignments and how those would help us to learn more. Also, the online learning should be based on the essential concepts that will help us improve our studies.”

Annabel is also finding online learning to be challenging. She has run into issues with technology but also with teachers overloading students.

“Doing work at home has been quite hard. I know for a fact that many students at my school have had some difficulties, for example not being able to finish the class work in time let alone the assignments as the teachers have been setting a lot more work. We use Microsoft Teams, so we can have meetings and the teacher sets us tasks to do in lessons often including textbook work or work from a PowerPoint.”

Her main struggle lies with the absence of a teacher to guide the students, as “I think learning online can be quite difficult if the teacher does not set the work out clearly, as sometimes it is harder to find the links and powerpoints than doing the work itself and the fact of having too much work to do. However, it is much more reassuring when the teacher is online so you can ask him or her questions.”

Next year, like many students studying in international schools in Hong Kong, Sakura will apply to universities in places such as England, Scotland, Wales, Australia. She is studying the International Baccalaureate program, which is used in many schools around the world.

“I think the universities will be more lenient to students because GCSES, A-Levels, and IB exams have been cancelled. … Given the situation [we] cannot get much experience from shadowing, summer programs and so on, but ultimately we still need to try our best to appeal as candidates,” she says.

The GCSES and A-Level examinations are taken during the British equivalent of one’s sophomore and senior year, respectively; they are part of the British education system and are typically mandatory for admissions to a university in the United Kingdom. IB exams fall in line with the International Baccalaureate program and are required to graduate through the IB program.

“I am not worried about the impact that the lockdown will have on college applications because it is a national pandemic, and we cannot control it so I think that colleges will also do their best to help all the students,” she said.