One brush at a time 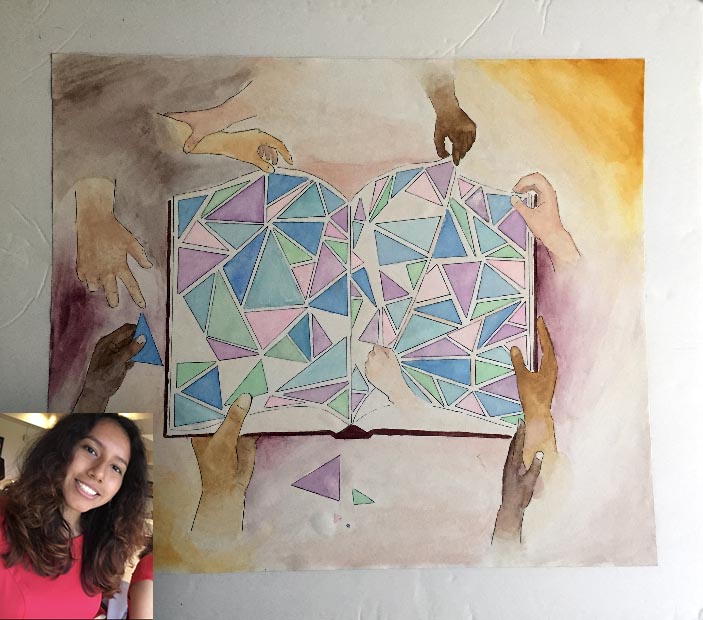 Students at Ygnacio Valley High School had the opportunity this year to enter a national arts competition sponsored by the National PTA, “The Reflections Art Showcase.” Attracted by the program’s theme, Bianca Salomon decided to enter an art piece and a poem.

“I decided to enter the competition because I really liked the theme, ‘Look Within,’” the Ygnacio Valley senior said. “And I thought it could have a variety of meanings, and I really wanted to convey that meaning through my love of books.”

Salomon produced a watercolor painting titled “Take a Piece,” which made it to the third round of competition.

“My art piece represented the idea that there could be one book that a lot of people read and yet everyone takes a different stance on that book or passage, hence why each person is taking a different piece of the book for themselves, while leaving other pieces for other people to take. Overall, it represents the idea that a book could go through so many hands and that there’s still so much left to be interpreted.”

Salomon said, “To plan, organize, and create my painting took about three weeks. The majority of it was thinking of all the possible ways I could relate to the theme, ‘Look Within’.”

The Reflections Art Showcase extends to elementary, middle and high school PTA programs, with multiple categories, ranging from visual arts to high school literature, photography and dance. Each entry is judged upon their interpretation of the theme, creativity and originality, as well as the technique shown in the area of art the students chose.

Ygnacio Valley had 17 entries, 10 of which were in standard categories and seven as special education entries.  There are five rounds in local competitions in order to reach the national round.

“I was anxious to see how far my piece would go, and I was surprised when I found out I had gone to level 3,” Salomon said. “I was happy just to enter but this gave me confidence to keep pursuing art.”

Although she has been practicing and learning about art all throughout high school, Salomon got her first taste of art in middle school.  “I started art in sixth grade when I took art as a class rotation and I thought that it was something fun,” she said. “Not necessarily easy though, and it’s still not easy for me now, but I like the challenge that art gives me when I don’t know what to draw.”

When asked about her creative process, she said, “Sometimes I find that trying to sit down and produce art is hard for me because at the moment I just can’t think of what to draw or I don’t have any new ideas.  But when I’m taking a walk outside or going through my day at school then something eventually comes to my head and I just create a world out of it that I want to convey in my drawings.”

Solomon said she believes emotions that you may feel are too vulnerable to show people can be displayed in art. She is inspired to make art by the emotions she feels before making it and what she gets out of it in the end.

Although many of her pieces are sketches and watercolor paintings, Salomon said her favorite type of art is made with acrylic paint.

“With acrylic you can make it flat on a canvas or you can brush the acrylic on the canvas so there are visible brush strokes or you can even paint little acrylic mountain peaks coming out of the painting making it look more 3D,” she explained. For example, you can use blue paint to make it look like waves are coming out of the painting rather than looking flat, she said.

Salomon said she hopes to find her own personal style soon. “I’m still trying to figure out what that is and it can take years for some artists and some artists find it easily. I’m trying to find it this year and that’s my goal for this year.”

She said she is interested in styles used by Disney and Studio Ghibli. “I find their styles fun but also unique.” And she’s inspired by artists Hayao Miyazaki and Banski. “Hayao Miyazaki because I find his artwork as imaginative and full of spirit. It reminds me of my childhood. I am also inspired by the artist Bansky because of the fact that they are anonymous and use the world as their canvas. I think his art gives us something to think about.”

She added, “Art has also given me role models to look up to. Whether that be in the form of musical artists or traditional artists, I think it’s cool that I have these people to look up to.”

It’s art that has impacted her life by giving her a way to sort through her personal feelings of doubt and insecurity. “I think it’s also because I can look at these things in a new light. I’ve learned to appreciate what’s around me more,” she said.

Art is something she wants to continue doing.