The many trials of Rosie Cruz 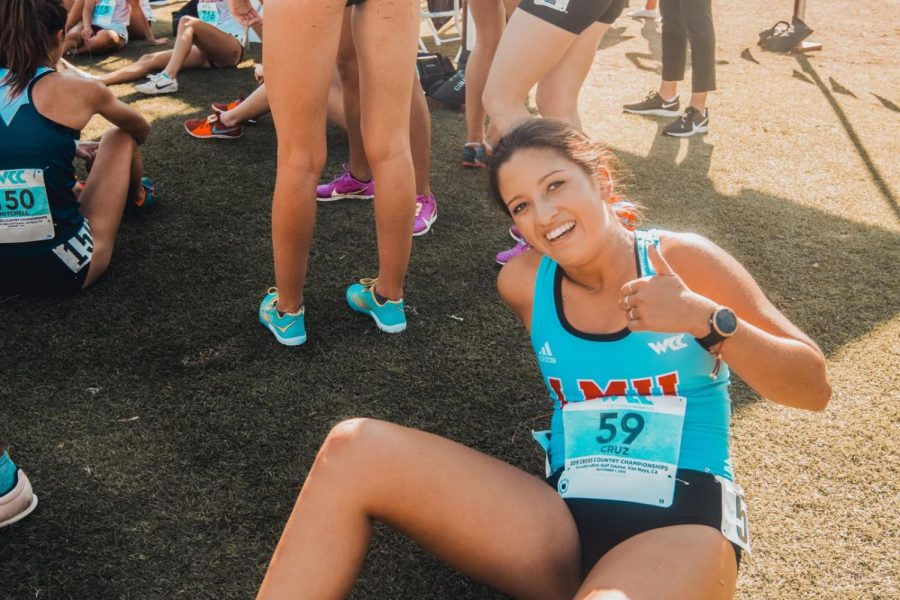 Only a year into running and already committed to run track and cross country for a Division I school, Rosie Cruz graduated from Miramonte in 2017 bursting with potential and excitement for the collegiate field of competition. This vision Cruz had for Loyola Marymount University was not the reality she experienced.

Her story instead involved a multitude of stress fractures, miles of running through pain, what she describes as years of emotional and psychological abuse, and what she believes was an absence of support from her university and the National Collegiate Athletic Association (NCAA) once she found the courage to share her story.

“Looking back, It felt like for two years of my college career, I was just wasting my time,” said Cruz, who joined the Miramonte track and field team at the end of her junior year. At the time, she was a devoted club soccer athlete and only competed in one season of high school cross country her senior year.

“I had visions of the potential that I had because I was so new to the sport, and high school was sort of untapped. And going into college, I thought that, you know, I might be a really great runner, and that I might really improve,” Cruz said. “And, unfortunately, that was not really my experience in college. And I don’t think, necessarily, that’s my fault.”

On the Miramonte team, Cruz emphasized the support and care each athlete and the coaches had for one another. “I felt like I became the best athlete that I could with the shortest amount of time that I was there,” Cruz said. She graduated from high school with a supportive running community that valued her voice and embodied comradery. She expected the same, if not more, of this camaraderie and support in her transition to collegiate athletics. But unfortunately, Cruz experienced something else.

At LMU, Cruz describes witnessing three other freshmen recruits battling mental health issues and eating disorders, and what she felt was Head Coach Scott Guerrero’s negligence and disregard to her teammates’ suffering.

Cruz herself fell down an injury cycle, starting with a stress fracture in her foot and extending to multiple stress fractures and two bulging discs in her lower back.

“They told me that my pain wasn’t real. They would say things like, ‘it’s ghost pains, it’s in your head, running is really tough. You’re new to the sport. So you don’t really understand that running is really hard.’ And they doubted me every time I brought up the pain in my foot,” Cruz said, sharing comments she said she heard from Guerrero when she couldn’t even bear weight on her damaged limb. It seemed she was running too much mileage for her body to handle.

And it wasn’t just one athlete — Cruz believed almost her entire team was battling either a serious injury or an eating disorder at the time. “I was trusting this person who is having me do the exact opposite of what the doctors prescribed me to do.”

After two years of being unable to compete or see improvement as an athlete, Cruz finally had an epiphany when she moved out of state during the pandemic and trained on her own.

“When I was on the team, it was really hard for me to stand up against it because I was sort of in survival mode. I was like, ‘I just need to get through this. And I just need to graduate and, you know, move on with my life’,” Cruz said. “And when I moved out to Colorado, I realized that wasn’t normal. In my year that I was training alone and finally healthy and happy for the first time in four years, I realized that nobody else has said anything [about this treatment] during the entire 23 years that [Guerrero] has been at LMU.”

In March of 2021, approaching the end of her senior year, Cruz found the courage to share her story and demand a change from her Head Coach and the Athletics Department at LMU.

Demanding an internal investigation into the coaching staff and Athletics Department, March 25 Cruz first tweeted about Coach Guerrero and the psychological abuse she said she experienced and then took to Instagram. From there, her story took off, making impressions on hundreds of thousands nationally, and garnering attention from numerous media outlets, including NPR, Runnerspace, USA Today, and the Los Angeles Times.

Within weeks, Cruz said, over 12 athletes on the LMU cross country and track teams spoke up against Guerrero and about their personal experiences in solidarity with Cruz.

“Rosie has always been an influence to me — even in high school. She’s always spoken up for herself and for others,and that’s very admirable,” said Cassy Haskell, a 2019 Miramonte graduate and cross country and track athlete at the University of California, Berkeley.

“I mean, I’m pissed, because I think that student athletes deserve better. And I feel like it shouldn’t have to take one person to carry the burden of hundreds of people to get minimal justice from an institution,” Cruz said.

Her background in political science and women and gender studies has given her the confidence to speak out against abuse. Cruz learned about abuse cycles, power dynamics, and male hegemony through her studies, and how they paralleled her adverse personal experiences.

Currently Cruz is a legislative aide for Colorado State Representative Lindsey Daugherty, making changes in the community around her every single day with work in policy briefs and police reform.

“Having a job in politics gave me the confidence to, like, realize that I actually have the ability to speak out as a woman of color, and understand that my reality is real, and that I can speak out against oppression,” Cruz said.

Cruz explains this issue expands beyond just her college program and LMU; she is fighting for a greater change in the National Collegiate Athletic Association (NCAA) as a whole. Cruz wants to reconfigure the way the corporation profits off athletes and believes that athletes should be able to profit off their names and likenesses through sponsorships or other deals and receive compensation for their efforts.

“My program is, like, literally one program out of this big institution that profits immensely off of the free labor of athletes,” Cruz said. “They’re running a business model. And we’re the workers. That’s why when I’m injured, they’re frustrated with me. And when you get injured, it doesn’t matter, it’s about how quick you can get back and produce whatever they need, so that they can keep their jobs and make money off of you.”

Cruz is advocating for more accessible resources for college athletes and immediate support from mental health professionals and doctors for every team. “I think that’s, like, laying the foundation for a really healthy future of college athletics. It’s not just a poster in the locker room that says ‘mental health matters,’ or a pamphlet given to you at the beginning of the year. But that you actually have real people you can go to when you’re struggling,” Cruz said.

Cruz’s former coach and the Head Track and Field and Cross Country coach at Miramonte, Tristan Tool, strongly believes that athletes need trust in their coaching staff and reassurance that wellbeing is a priority. Her “ case is the basis of the fundamental issue that she is trying to change within the NCAA,” Tristan Tool said. Tool believes that the NCAA should have an unbiased, third-party representative on every college campus that advocates for the wellbeing of student athletes, a missing part in many college programs. “This would be a person that holds coaches and administrators accountable. A person that maintains a budget and manages projects aimed at the betterment and education of student athletes on their physical and mental health,” Tool said.

Cruz takes pride in the sense of healing and support other athletes are getting from her actions. But even the positive response to her activism brings to light the number of athletes who sadly resonate with her story.

“I wouldn’t say it’s a good thing. It’s them saying, ‘I stand in solidarity with you. And I feel like this happened to me, too.’ And so that part is, like, super hard. Because, yeah, it’s a positive response to my story. But it only shows that this is, like, a systemic problem within the institution of the NCAA,” Cruz said. “Healing means actually changing the way in which college athletics operates.”

Cruz’s posts have gained immense support and continue to spread on social media.

“The biggest thing that I can do — and that others can do—is to continue spreading awareness and putting pressure on LMU athletics, LMU, and the NCAA to do something. It’s really important to show support and help spread their voices,” Haskell said, who also believes that accountability in coaches is especially important for female athletes.

“At LMU, many of their female athletes have suffered high-risk stress fractures as a result of high mileage and lack of proper nutrition. This is really common in college athletics and coaches often find other excuses for these injuries because they are unable to admit that their lack of knowledge over women’s health leads to this,” Haskell said.

March 30, LMU President Timothy Law Snyder called the allegations “grossly incorrect” and “false,” the only response the public has seen from the university. On May 18, LMU announced that Guerrero’s contract as head men and women’s cross country and track and field coach will not be renewed.

The university is still conducting an open investigation, and no statements of any findings have been made.

Cruz sees this change in leadership as a small victory in the big picture. She is pleased her voice was finally heard. But “the scariest part is seeing the way the institution has reacted. And how grown adults are so concerned with their own profit and their own job titles that they just think of athletes as disposable. And they’re just waiting for me to graduate.”