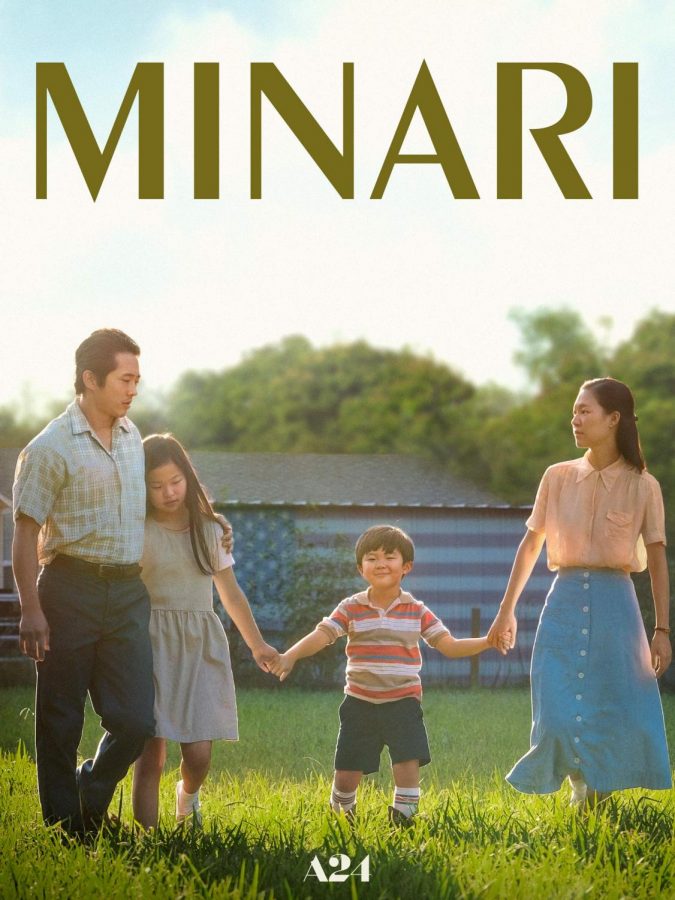 (Note: All quotes said in Korean are translated into English.)

“Minari” rapidly became one of the most distinguished films in 2021 and captivated a wide range of audiences. Minari is also a celery-like plant known for its ability to thrive in places most vegetables can’t. Or rather, a vegetable that reflects a Korean family’s complex struggle in adapting to a predominantly white state.

The film was released on Feb. 12 by Director Lee Issac Chung, a Korean-American immigrant whose life parallels that of the young boy on screen (David Yi). The story follows the Yi family, a Korean household that settles in Arkansas with the hope of commencing a new and better life. Inevitably, they encounter the common challenges of moving: financial struggles, cultural disparities and numerous fights. But the momentous challenge appears when the grandmother (Youn Yuh-jung) moves into their home and is immediately unwelcomed by the Yi children, David (Alan S. Kim) and Anne (Noel Cho). As the film progresses, their reluctance to accept their grandmother as a part of the family eventually unfolds the hidden struggle immigrants face: generational gaps.

The issues of generational gaps are mainly found between David and the grandmother, the youngest and oldest of the family. When the grandmother arrives at the house, David categorizes an “American” grandmother as normal whereas his grandmother is unfamiliar to him.

It’s also a matter of how age determines which culture is dominant. The grandmother is heavily ingrained with Korean culture, causing her to have a difficult time understanding American culture, let alone, automatically adapt to it. Whereas for David, he can easily adapt or understand different cultures due to his young age. Since one culture isn’t profoundly ingrained in his mind from the start, he has room for new cultures and eventually can settle on one, in rare cases two (but have one be dominant over the other), as he grows older.

The generational disparities continue throughout the film when David confronts the grandmother for not being a “real grandma.” He says: “Grandma, you’re not a real grandma. … Grandmas make cookies, they don’t swear, they don’t wear mens’ underwear.” But the issue is presented when the grandma frivolously replies with “I’ll try to be a real grandma from now on.”

Nonetheless, David’s unfamiliarity with the grandmother escalates into perpetually blaming her for every problem he notices. For example, when Monica (Han Ye-ri), the mother, finds out that her mom had a stroke, she explains to David that it “was her fault. That this happened because she was selfish,” which meant that she shouldn’t have brought her mom to America to fulfill her loneliness.

But for David, he walks up to his grandmother, who’s lying in bed, and whispers: “It’s your fault, grandma. It’s all because of you. You shouldn’t have come to America.” At this moment, his unfamiliarity with his grandmother is transformed into the familiarity of constantly seeing as wrong. David is reduced to a 7-year-old boy who holds onto his perceptions, too young to understand his mother’s words or his grandmother’s struggles.

However, this scene also provokes a slight sense of concern within David as he resorts to blaming his grandmother for the stroke to cover his feelings of sorrow and confusion. Thus, it portrays how generational gaps can also produce intimacy and empathy, provoking the idea that David and his grandmother needed to experience the struggles of generational gaps to form a closer relationship.

Their growing relationship is also seen through “hwatu,” a Korean card game most famous among the elderly. In the beginning, the grandmother shows David the card game and when they play together, she shows excessive excitement whenever she’s in the lead but David only observes the game. However, when he visits his friend’s house, he spontaneously mimics the same actions and words of what the grandmother said when she played, proving how their relationship is slowly growing.

Lee confirms the rewarding outcomes of generational gaps in a Variety interview with Bong Joon-ho, the director of the Oscar-winning film Parasite. Bong comments on how Lee might have been “too young to understand what was going on [in his life],” specifically how he must have not known “how his mother felt, father felt and why they are fighting and then getting back together.” Lee confirms this but also states how “understanding the perspective of his daughter helped him understand his parents’ struggles” and ultimately, allowed him to form a closer relationship with his parents.

“‘You understand us, you see us’ is what they [parents] told me,” said Lee.

As anticipated, Lee’s portrayal of the duality of generational gaps is accurate. In my own experience, my younger self couldn’t understand my family’s behaviors nor the struggles they were experiencing, but as I grew older, I began to understand my parents’ struggles and eventually, show empathy that had been lacking for so long. Our relationship became closer and the root cause of this was the fact that I simply broke the generational gap that was constantly prohibiting us from understanding each other.

The film nears the end when the unconscious grandmother (due to the stroke) accidentally sets the cottage on fire. Due to the shock, the grandmother flees into the woods until both David and Anne catch up and block her from walking away even further. Instead of blaming her for the fire and fleeing, David says: “Please don’t leave us, grandma. Come home with us.” And after a long gaze between David and his grandmother, all three of them hold hands and walk back to the house.

“Minari” highlights the unpredictability of immigration but also exposes the challenges of generational gaps. It opens up how immigrational challenges aren’t one-dimensional, rather full of hidden issues that are the root of the perpetual struggles. However, it also sheds light on how generational gaps strengthen relationships with one another, where David and his grandmother learns how to endure, be patient and love: A growing relationship that learns how to thrive in a new circumstance, similar to how the versatile minari vegetable thrives in a new place.