Goal of forum to stir up conversations in a safe, constructive manner 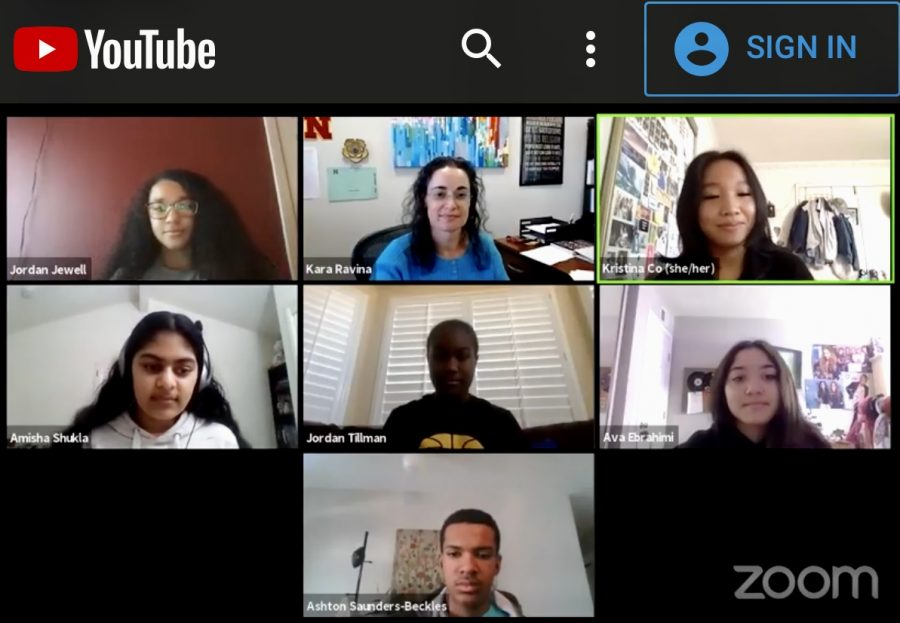 Throughout February, Black Student Union members brought the Northgate High School community highlights of history, achievement, and celebration of African-American and Black activists, writers, thinkers, and athletes. All were published and promoted on the school’s website, in homeroom classes, and in grade-level Google Classrooms, and may be found on the following link: Black History Month.

As many are quick to point out, the celebration of African-American and Black achievement needs to occur all year, not just during a dedicated month.

In December, a group of students participated in a student forum on racial inclusivity and diversity that covered a wide range of issues and topics. The panel convened Dec. 9 for the second-ever student-lead forum, this one on the topic of racial inclusivity. Participating from their homes in a live virtual discussion, the students clearly communicated the need for personal, individual, academic and curricular awareness for diversity inclusiveness.

Kristina Cổ , the senior class president and secretary treasurer at Northgate, led the forum with the support of Northgate’s administration. Junior Jordan Tillman, sophomore Ava Ebrahimi, and freshmen Jordan Jewell, Ashton Saunders-Beckles, and Amisha Shukla offered powerful comments and opinions on a myriad of imperative questions on their experiences and observations involving race and diversity in a YouTube live Zoom format with a live chat where observers could ask questions and show their support.

The goal of the forum was to stir up conversations in a safe and constructive manner, where these students, all from various backgrounds, could express their opinions, as well as give constructive criticism to try to make Northgate High School a more aware and accepting atmosphere.

Reflecting after the forum, Tillman, one of the upper grade student panelists, credited Northgate with “taking steps towards being more racially inclusive and aware. I think the forum was a success because it opens up new ideas and paves the way for more similar events – my hope is that while this forum will be behind us the spark the topic creates will continue to burn bright throughout the Northgate community. The work doesn’t stop here, with this one forum. These are issues and topics that will forever be present in our community, lives and the world: it is of the utmost importance that we continue to acknowledge them and do something about them.”

Cổ, who moderated the forum by asking questions of the participants and who occasionally responded to issues of diversity from her own perspective, said afterward she was pleased with the event.

“I felt a bit nervous approaching it,”  Cổ explained. “My biggest fear was that this conversation would be met with hatred and that would make our panelists uncomfortable. I wanted to make sure our panelists felt safe talking about their experiences. I felt extremely relieved throughout the forum, hearing these strong voices and also that the YouTube Live was being met with enthusiasm.”

The forum is available on Northgate’s Youtube channel on the link https://youtu.be/SOD9ZN1j_Jk  . The following includes some of the discussion highlights and topics.

The panelists responded to a series of questions put forth by Cổ , starting with, what does race mean personally, as well as what race each of them identify as.

“Well, race to me is how we divide ourselves, good or bad,” said Tillman. “We tend to go to others that look like us, act like us, and talk like us,” said Tillman, adding that she identifies as African American or Black.

“Race is kind of where we come from, what our backgrounds are, what our roots are, whether it be a very complicated one or a very simple one. It’s just simply where we are from and who we are,” said Shukla, who identifies as Asian Indian.

“For me, race kind of defines who we are whether we want it to or not. Knowing who you are is really important in discovering who you want to be,” said Jewell, who said she identifies as Black/African American and white.

Freshman Ashton Saunders-Beckles responded similarly. “Race is how you identify based on where you are from, your culture, and appearance,” said Saunders-Beckles who said he identifies as African American/Black.

One of the powerful parts of the forum was when each student addressed the question of recalling their earliest memory of realizing that differences in race can impact them and others.

When Tillman was asked to recall her earliest memory, she gave a quick synopsis and explained how when she was five or six years old and playing on the playground with one of her school friends when her friend’s mother came to pick her daughter up. The mother went up to Tillman, telling her she was not allowed to play with her daughter because she was Black.

“And that was the moment I realized that I was different from the rest of the kids in the playground,” Tillman said. She added that it really hadn’t struck her that she was one of the very few Black students at her school until that moment – and that at that moment she realized that she would not be treated the same as the other kids.

Jewell explained that for her, she has almost always been aware of who she is and where she came from ever since she could remember. It was very important for her to be educated and know her own heritage and history, so there wasn’t really any specific moment where it struck her. Fortunately, she said, she went to a fairly diverse elementary school where she was lucky enough to not be singled out or feel too different from the others.

Similar to Tillman’s experience, Shukla’s earliest memory was on the playground. She recalled how in the first grade she and her friends were playing “princesses” and their current obsession was Cinderella and that “of course,” she wanted to play the part of Cinderella. Shukla shared her recollection that one of her friends made the comment, “You can’t be Cinderella, your skin is too dark.” That was the childhood moment that Shukla was also hit with the sudden burst of knowledge that people notice skin color – and that she was deemed unfit to be a princess on the childhood playground.

Impact of race on all aspects of life:

The discussion on this topic ranged from how race has played a role in their families, social life, and school life.

“Our parents would also talk to us about how to be safe outside and how to act when authorities came up to us, which is not something parents should have to tell their kids how to do,” said Tillman.

Even Cổ , the moderator,  added her own experiences. She talked about how she got several COVID jokes because of her Asian background and said she was expected to “carry a portion of educational projects because of the stereotype of model minorities.”

A recurring topic was how racial inclusivity not only affects one’s home and family life, but it also has an impact on everyday school and social life.          “Just like there are people out there who will make racial slurs at you, there are also people who will accept you despite where you come from,” Shukla explained. “It can be nice to have friends that are different from yourself, yet simultaneously accept you and love you for who you are.”

Tillman and Jewell shared their stories.

Tillman said there have been many occasions where she has come across someone calling her the “n-word”, a racial and highly offensive slur. “The first time, OK, maybe I’ll ignore it. The second time, well, it starts to get me a little bit annoyed, but if they continue to throw the word around time and time again, I have the right to stand up for myself and also bring it to administration,” Tillman explained.

On another occasion, a substitute teacher was blatantly insensitive when she came up to Tillman and asked her “Your name is Jordan? Well that’s not a very African name.” Tillman described how she “politely but slightly peeved” responded by saying that she was an American. However the substitute continued to tell her that she should have a name more fitting to her “culture”.

Finally, Tillman expressed her frustration when reading a book such as To Kill a Mockingbird, which contains the use of racial slurs throughout. All the participants agreed on how having this older literature and knowing what life was like back then is essential; however a warning, or a heads up from the teacher would be more appreciated.

Tillman said she would also appreciate if the other student wouldn’t turn around to stare at her when slavery or racial slurs were talked about because she feels “singled out” and “very uncomfortable”.

Jewell shared her experience with a science teacher from her previous middle school who “loved to relentlessly pick on” Jewell every single day just because of her Black heritage. He wouldn’t give her the same opportunities and repeatedly made racist jokes.

“It was very hard to ignore. He even encouraged other students to throw away my papers, and if I wanted a grade, I’d have to get it out of the garbage and give it to him,” Jewell shared.

Implementing change – ways that Northgate High School can get better and be more racially inclusive:

Panelists said they would love to see more diverse books, movies, and overall curriculum that is not so European-based and gets different perspectives of people from all backgrounds, as well as a more active effort to reach out to the students, especially from minorities to get their opinions/comments.

Additionally, the student participants expressed how it is crucial to educate people on issues of diversity and inclusion at a young age instead of starting in high school.

“We, our generation, are the future. We need to start educating at a young age because most of us have our minds made up by the time we get to high school,” said Tillman passionately. “High school should be used to reinforce these ideas and values, not start building them.”