Show must go on during distance learning 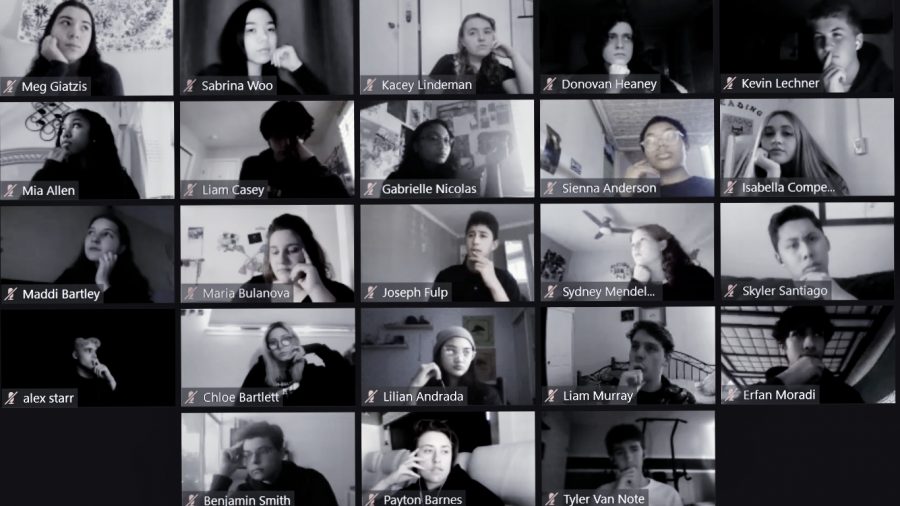 Production Workshop members continue their creativity even on Zoom, as seen here on Dec. 4. Not pictured, Drama instructor John Litten.

It comes as no surprise that the teachers had to get creative this year with the entirety of learning taking place virtually.

Online education is already challenging enough with internet connection and technology difficulties. Beyond that, adding other layers of difficulty such as auditory delay, clarity of sound and visual glitches response, and the general confusion can leave a class experience far from ideal.

While this is the reality for many classes, it is especially profound in the performing arts. With the COVID-19 pandemic that closed many schools including Northgate from on-campus learning, a common question is: How are the performing arts supposed to learn, master and perform?

Teacher John Litten, in his third year of teaching Drama and English at Northgate High School, said this year he will really home in on teaching his students acting techniques in a more conventional and flexible way. One of his priorities is to “let the kids have freedom in what they do in class but also support it with an educational backbone,” Litten said.

“The hardest part of teaching virtually is not being able to connect with the students and build that strong family aspect that drama is all about,” Litten added.

But what about the students? How are they adapting to this new form of learning and producing?

“The hardest thing seems to be finding ways to make short films and productions without any in-person actors. Having to use camera manipulation, zoom boxes, and cumbersome workarounds has posed as a real challenge. It’s hard to realize a vision when you’re entirely alone,” said senior Liam Murray, a Production Workshop, the highest level of drama, member.

“We’ve had to shift our project formats, which means a lot more work with film,” said senior Kacey Lindeman, another member. “As cool as this medium [film] is, I’ve only ever done live theatre, so I’ve struggled with the process of making films, especially because I’m doing it alone in a room.”

Litten said recently he is steering his drama classes toward performance. “If we return, absolutely we’ll put up a show,” Litten said. “Drama II just wrapped up our ensemble and monologue work. Next we’ll start to look over scripts for a possible Zoom performance.”

Even though this year looks like the only box seats may be via Zoom squares, students say they have faith that once again they will be smiling, laughing, and acting with their peers in Northgate’s Little Theater.

“Production Workshop has been a place to build connections and become close friends with people you otherwise would not have met,” Murray said. “Because of distance learning, we have been sort of isolated from each other. I just hope that we can find a way as a class to build the close relationships that often come from working as an ensemble.”