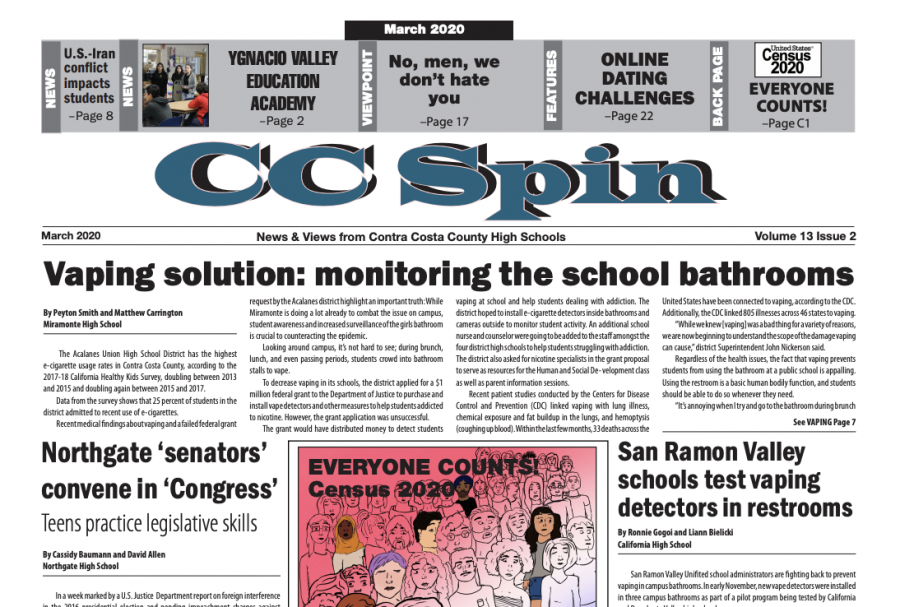 The Lesher Awards recognize excellence in news reporting, feature and opinion writing, photography, editorial cartoons, design, and, for the first time audio journalism. The competition is open to Contra Costa high schools as part of the CC Spin newspaper program and is judged by professional Bay Area journalists.

The winners and their entries were revealed in a new web site (ccspin.net), which was created in place of the traditional awards reception.

“Like every other school-related activity we had to quit in-person interaction, so that meant canceling the annual awards event at the Lesher Center for the Arts,” said CSJI Director Steve O’Donoghue.  “But we didn’t cancel the recognition. Students worked hard at journalism and we wanted to make sure they received their well-earned honors by presenting their work online and to a larger audience. Their awards will be mailed out to them.”

The website also features stories and news content that normally would have been carried in CC Spin, a county-wide print student newspaper published three times each school year. The closure of Bay Area schools in March made distribution of the third edition impractical, said O’Donoghue.

“We hired a webmaster, Casey Nichols, a veteran journalism adviser and nationally recognized teacher and consultant from Rocklin, to set up a new website for us to host student work while we are compensating for the impact of the coronavirus,” said “O’Donoghue. “We will also add in social media as we develop the site.“

CC Spin and the Lesher Awards are a collaboration of CSJI, the Dean & Margaret Lesher Foundation, the Contra Costa County Office of Education, and the Bay City News Foundation.

“The voices and stories of diverse youth are critical to civic dialogue in schools and the broader community,” said Melissa Stafford Jones, Executive Director of the Dean & Margaret Lesher Foundation. “Our foundation is proud to support high school journalism in Contra Costa County and our congratulations go out to this year’s Lesher Awards honorees.”

Katherine Ann Rowlands, head of the Bay City News Foundation, said, “Reading these stories is so inspiring. Not only is the quality of the work exceptional, but these students are covering issues that really matter and that might not otherwise come to light. These young journalists have bright futures ahead.”

Rowlands said Bay City News Foundation will be cross-publishing some of the stories on its nonprofit website, LocalNewsMatters.org.

Overall Podcast Excellence is a new category, and first place went to Dougherty Valley, followed by Acalanes and California.

In Features, there was a tie between “The Rise and Fall: The Adventures of Huckleberry Finn” by Jamie Lattin (Acalanes) and “Michael Schneider: A Bohemian Ultrarunner in the Making” by Eva Shen and Harshita Neralla (Dougherty Valley).

Seta Salkhi (Monte Vista), took first place in Personal Column for “OCD: What You Think You Know – And What You Don’t.”

Editorial/Opinion had a tie between “Is Reading a Fading Hobby Among Teens?” by Macie Calvert (Monte Vista) and “Historical Simulations Bring Real-Life Tensions Into Classrooms” by Vivian Kuang and Kavin Kumaravel (Dougherty Valley).

First place in Photography  was a tie between “Football,” by Nima Pendar (California) and “Protester,” by Natalie Seiler (Acalanes).

“Falling For These Treats” by Michelle Nguyen (California) won in Page Design.

And this year’s CC Spin Student Editor of the Year went to Clara Stevenson (Ygnacio Valley High School). Each high school in the CC Spin program has a student editor who serves as the liaison between the school’s journalism program and the CC Spin program.

The mission of California Scholastic Journalism Initiative’s CC Spin program is to assist Contra Costa County high schools in training students to better understand and appreciate the role of a free press in our democratic system, the ethics and appropriate behaviors of journalists, and to protect and value the First Amendment in our society. Our goal is a student newspaper in every Contra Costa County high school that is a voice for student concerns and measures up to the highest journalistic standards.